Pope welcomes another group of refugees from Lesbos accompanied by Card. Krajewski 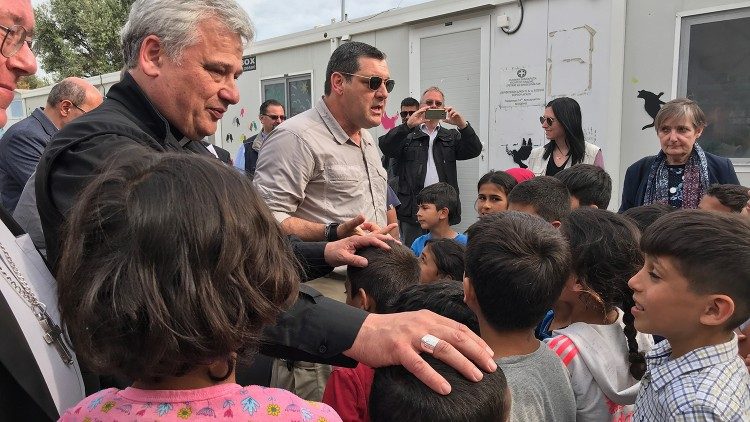 On the express "wish" of Pope Francis and thanks to a new "humanitarian corridor", next Wednesday "33 refugees seeking political asylum" will arrive in Italy from Lesbos, Greece. The Apostolic Almoner, Cardinal Konrad Krajewski, left on Monday for the island in the Aegean Sea, from where he will return on 4 December accompanying these migrants. Alongside the cardinal were some leaders from the Sant'Egidio Community. By the end of the year this group will be joined by "another 10 refugees".  The news was contained in a communiqué from the office of the Apostolic Almoner.

The mission follows that which the cardinal himself, as envoy of the Pope, carried out in Lesbos last spring. It also follows the visit of the Pope who personally met with migrants from the Moria refugee camp on 16 April 2016. He then returned to Italy with 3 families of Syrian asylum seekers, whose reception and sustenance was taken care of by the Holy See, while the hospitality and the path of integration was provided by the Sant'Egidio Community.

Another gesture of solidarity

By sending the Papal Almoner among the island's migrants in May, Pope Francis wanted to renew his closeness to the Greek people and refugees and at the same time expressed his desire to make a "further gesture of solidarity", hosting "a group of young refugees and some families" from Afghanistan, Cameroon and Togo. After an "intense itinerary of official negotiations" between the relevant bodies, the Italian Ministry of the Interior gave "its definitive consent" to carry out the operation. The reception of all these refugees will also be "at the expense" of the Holy See, through the office of the Apostolic Almoner, and of the Sant'Egidio Community.

On 19 November the archdiocese of Luxembourg, led by new Cardinal Jean-Claude Hollerich, who in May had participated in the mission of Cardinal Krajewski to Lesbos, also opened its doors to two families of refugees from the same camps on the Greek island, one originally from Kuwait with two children aged 8 and 5 and one from Syria with twins aged almost two years.

Pope: Make the world more human by guaranteeing the dignity of the disabled

On the occasion of the International Day of Persons with Disabilities, December 3rd, Pope Francis recalls how the promotion of the right to participation plays a central role in combating discrimination and promoting a culture of encounter and quality of life.