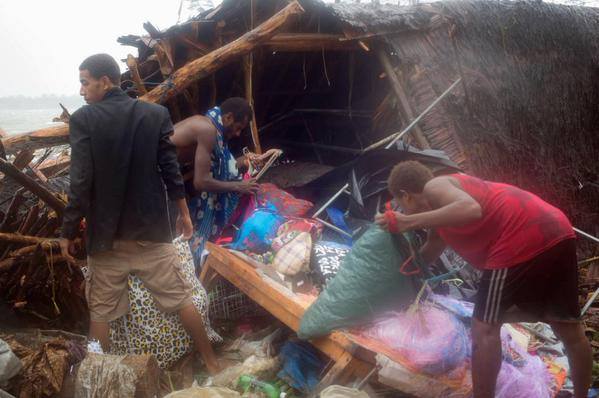 The South Pacific island nation of Vanuatu has been devastated after a massive storm struck on Friday 13 March. The deadly storm hit with wind gusts of up to 340kph.

“In Port Vila the destruction is everywhere, and there’s no news from anyone around the islands yet,” says the Bishop of Port Vila, John Bosco Baremes SM from the devastated capital. “There’s just no shelter, with so much having been blown away, and people will need somewhere to shelter while they rebuild.”

The Diocese of Port Vila has established a Disaster Committee to assess damage and plan a response.

Up to 90 percent of buildings on one of Vanuatu main islands have been destroyed or damaged as aid workers rush to help survivors of Cyclone Pam. There is an urgent need for food and clean water in the capital Port Vila, especially in the evacuation centres.

Caritas Australia and Caritas Aotearoa New Zealand have sent emergency staff Mark Mitchell and Stephanie Lalor to Vanuatu to link up with local church structures. The programmes will likely focus on shelter and providing drinking water, as well as food and basic aid items.

“In emergency situations such as this, the Church plays a valuable part in providing assistance to the most vulnerable communities,” says Mark Mitchell, Humanitarian Programmes Coordinator for Caritas Aotearoa New Zealand.

Vanuatu’s President Baldwin Lonsdale described the storm as “a monster that has devastated our country.” In Rome, Pope Francis pledged his “solidarity with the people of Vanuatu…I pray for the dead, the injured and the homeless.”Caritas organisations from around the world have pledged their help as supporters send in donations.

Covid-19 Response Must Not Leave Anyone Behind

Nobody should be left behind and aid must be ensured for everyone, particularly in developing countries, where the pandemic may lead to even more catastrophic consequences than experienced in the West, due to the weakness of health structures and national economies.