In a Decree released on Tuesday, Pope Francis has appointed Dr Pier Francesco Pinelli as Temporary Administrator (Commissario straordinario in the original Decree) of Caritas Internationalis. The Decree also names Dr Maria Amparo Alonso Escobar and  Rev. P. Manuel Morujão, S.J., as support to Dr Pinelli "for the personal and spiritual accompaniment of the employees”.

In addition the decree also states that those serving as President, Vice-Presidents, General Secretary, Treasurer, and Ecclesiastical Assistant “shall cease from their respective offices”; and that Cardinal Tagle, President of Caritas Internationalis until now, will assist Dr Pinelli in the duties entrusted to him.

Caritas Internationalis, the Pope says in the Decree, assists him personally in his own ministry to the poorest and most in need, manages humanitarian crises, and collaborates in spreading charity throughout the world “in the light of the Gospel and the teachings of the Catholic Church”.

Pope Francis also explains in the Decree his motivation for appointing a temporary administrator, saying the move is necessary to review Caritas’ norms and procedures and to make necessary preparations for the elections set for the next General Assembly. 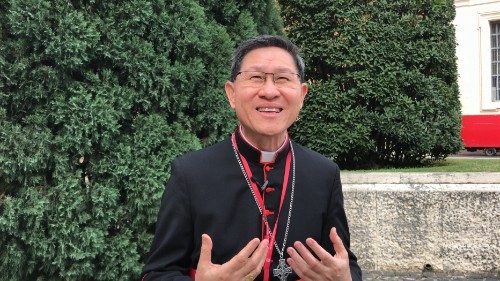 Tagle: Pope's decree a process of humility and discernment for Caritas

About the new appointees

Temporary Administrator of Caritas Internationalis, Dr Pinelli, is described in the Press Statement as a “well-known organizational consultant and administrator”, “with a more humanist than technical way of proceeding”. With a background in Ignatian spirituality, his volunteer works include “the recovery of drugs addicts, in development cooperation, support for missionary works and catechesis”. His professional portfolio includes “33 years of work…in different sectors”, and 10 years as “CEO and then Chairman of large energy companies”. His consultancy expertise has benefited the religious, secular, and cultural sectors, including serving as the Administrator of the Italian Government for the rehabilitation of cultural and performing arts organizations, the Jesuit Education Foundation, the DPIHD, Magis, and Treccani. Dr Pinelli was a member of a pontifical commission appointed for the “evaluation of the Dicastery for Promoting Integral Human Development and of the dicasterial commission for the evaluation of the Migrants and Refugees Section”.

Alongside Dr Pinelli will be Dr Maria Amparo Alonso Escobar, currently serving as Head of Advocacy for Caritas International, and by Fr Manuel Morujão S.J. Economist Dr Alonso is a graduate of Extremadura University and has worked with various Caritas member organizations for 28 years. Father Morujão, has been involved in pastoral and spiritual ministry in Goa, Cape Verde, as well as his native Portugal, and was appointed as a Missionary of Mercy by Pope Francis. The Press Statement further states that “the functioning of member organizations” will not be affected by these changes. Rather, the Statement emphasizes, the measures announced today “will serve to strengthen such service”.

Listen to our report

The Dicastery for Promoting Integral Human Development (DPIHD), the Dicastery in which Caritas Internationalis is situated, also issued a Press Statement, explaining that Pope Francis’s decision comes “after a review of its [Caritas Internationalis] operations by an independent panel”. It further clarifies that “financial matters have been well-handled and fundraising goals regularly achieved”. The motivation for taking this step, the Statement explains, is to better serve “its member charitable organizations around the world”.

The decisions announced today follow a review commissioned by the DPIHD. The scope of this review was “the CI General Secretariat and the alignment with Catholic values of human dignity and respect for each person. The review was performed by a panel of independent experts that included, in addition to Dr Pinelli, psychologists Fr Enrico Parolari and Dr Francesca Busnelli”. The Statement further clarifies that “no evidence emerged of financial mismanagement or sexual impropriety”, but that “real deficiencies were noted in management and procedures, seriously prejudicing team-spirit and staff morale”.

Cardinal Michael Czerny S.J., Prefect of the DPIHD, acknowledges in the Press Statement that “the needs of the many whom Caritas serves” has increased markedly in recent years”. “It is imperative that Caritas Internationalis be well prepared to meet these challenges”, he stated. With today’s decision, Cardinal Czerny explains that “Pope Francis invites us to consider ‘the mission that Caritas is called to carry out in the Church…. What we must never forget is that charity has its origin and its essence in God himself (cf. 1 Jn 4:8); charity is God our Father’s embrace of every person, particularly of the least and the suffering, those who occupy a preferential place in his heart’ (27 May 2019). These words inspire everyone involved in CI to ensure the organization proves equal to its mission”.

Caritas Internationalis is a confederation of 162 Catholic relief, development and social service organizations, operating in more than 200 countries and territories worldwide. Its headquarters is incorporated in the Holy See and is supervised by the DPIHD.